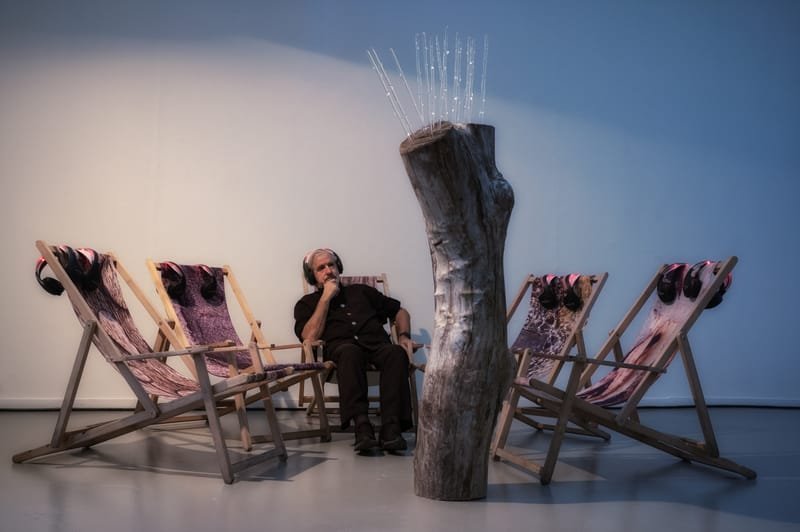 Bert is a conceptual artist. He uses all the fine arts and combines them as he pleases.

At a young age, Bert Barten walked through life full of amazement. At the age of eight he excelled in drawing and painting as well as making music. He won many prizes playing the accordion at many competitions just like his grandfather. There the seeds of his creative expressions were sown. Ordinary everyday life was stranger to him than the world he created for himself. After a difficult childhood in the sixties and seventies, he locked himself up in a mill in Heesch to write his first 40 compositions for his band Marsh Mallow. Which he toured with for years. When he kept dragging the set onto the stage, his environment told that he was making theater. It was the time when Performance Art was created and the term “gesamtkunstwerk” was born for Bert.

Connecting the various art forms has always been of paramount importance. Bert saw with sorrow that the different art forms that could be found on a stage at the same time split apart. The musicians entered the conservatories and the first rock schools were established. The poets and writers disappeared into the literary cafes. The word artists disappeared in the theater schools. Artists disappeared in Galleries and we saw the same movement in science. Specialists in every direction emerged with their own vocabulary. The world fragmented before Bert's eyes. This resulted in an important performance in the Theater Institute of Amsterdam entitled “Fragmented-Science”. Scientists from different disciplines were brought to the table while reading from their own work. The highly educated people no longer understood each other because of their specialized vocabulary. During this performance, however, they were conducted by a real conductor who used the sound of the voices to make them sing one song. In this way a unity emerged from the fragmentation. Something that is still in great demand today. We no longer understand each other. How do we get to the center to sing a common song again.

We find this fragmentation not only in the arts and science, but also in our relationship to our environment. Since the internet our information flows have exploded and we are bombarded with all kinds of opinions that we have to figure out for ourselves what is true and what is not. This is also the case with our relationship to nature, which is not outside of us but of which we are a part. That is what we often forget. Nature does not depend on us, we depend on nature. When man has disappeared from the scene, nature will recover by itself, nature does not need man for that. All expressions of Bert have to do with wonder and nature. Dante's La Divina Commedia was about the mystical experience of the journey through Hell, Purging Mountain and Paradise, Goethe's Faust was about selling your soul to the devil for money, a very topical piece that is still valid today, a period where we are now in and in danger of getting stuck, Homer's Odyssey was about the same "Werdegang", leaving home, experiencing your adventure and coming home again. How do we get home? And then his last big production Dom Quichot on the Maasvlakte in Rotterdam. Don Quichotte, who came to shake up the Dutch with his Spanish temperament who were stuck in self-made regulations. These remain the major themes that Bert is passionate about. The wisdom hidden in the old classics and making it accessible to a wide audience.

Now with his project Talking Trees he holds up a mirror to humanity again. Vibrations from nature, vibrations that we cannot see or hear, he makes audible and visible to a wide audience. So that we can reconnect with the nature around us.